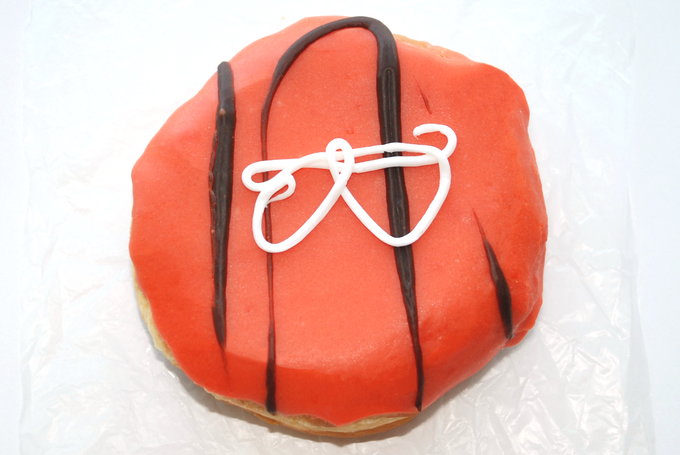 I just happened to be glancing in the donut case and saw this puzzler. Maybe the bakers were going for an animal theme – a tiger print. It looked so fun with the orange and brown.

No, I don’t dawdle around the donut cases. I don’t daydream about what eating every kind would taste like. In fact, I don’t dream about donuts at all. Let’s just be really clear on that.

But I couldn’t figure out what the white icing was. At first I thought it was a mistake, but all of the donuts on its tray had the same print. I figured the white was the tiger’s eyes. Yet, no mouth or nose – how odd.

I’m searching for the price tag to see if the name would help. It says Bavarian Bismark Donut 58¢. Still, I’ve got nothing.

I felt sorry for it then, because it had to be “an error” and surely no one would buy it. So, just to help it find a home I thought I’d buy it. (Isn’t that how you justify buying your donuts?)

I put it in its box, then as it happened to turn when I put it in my cart, I saw this.

A B! It’s a B for Bavarian Bismark. Now I felt like a complete idiot. Here I was thinking the Walmart bakers had gone saucy. And it’s a ridiculously easy B to see. 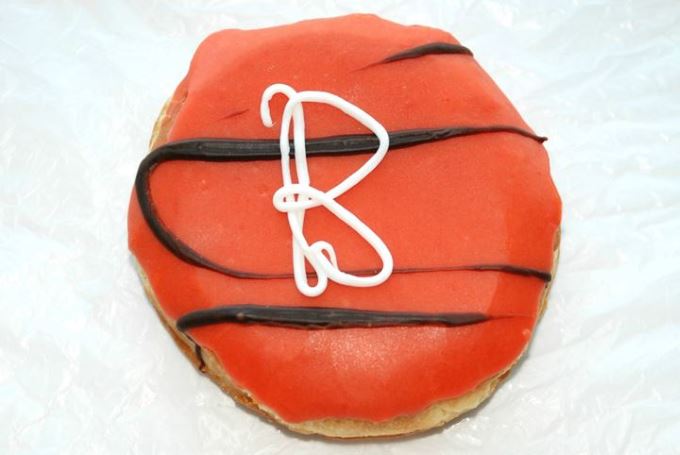 At home I had to test the kids and see if they knew what the white icing was when it was sideways. (You know, so I wouldn’t be alone in my idiocy.) I held it up for them like the first picture.

I was shocked when every single one said it was a B. Now don’t I have smart kids? You Betcha. Little smarties. 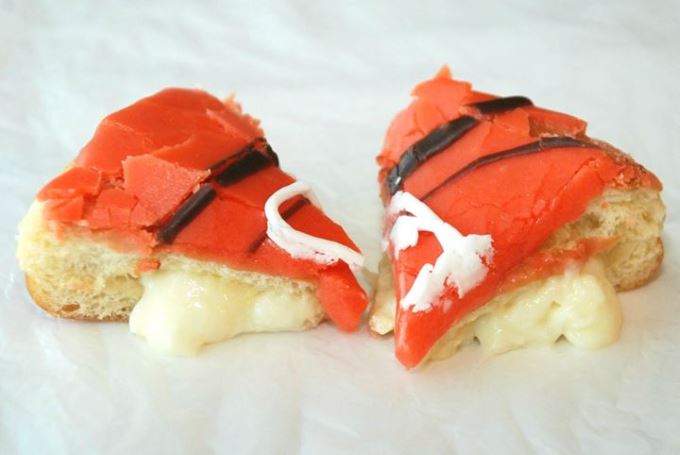 Bavarian Bismark Donut (IN STORES ONLY) 58¢

Since I showed them, then we had to divide it up into six so everyone could taste. Yes, my teeny tiny piece was good.

The icing was just like their regular white icing in flavor. Walmart’s donuts are always a treat – soft, airy, sweet, and moist. The Bavarian cream was pretty standard – it could have used a little bit more oomph in flavor. (I’m sure oomph is a word.) I personally prefer a whipped filling over this cream. I sure wish they would sell the whipped filling kind. But if you want a cream inside your donuts, this is for you.

I don’t recommend buying these “day old later”. When the cream sits on there too long, the donut can get soggy. You’ll want to only buy these fresh.

I hope you find a donut at Walmart that makes you laugh, tastes delicious, and you get to eat more than 1/6th of it.